Jax replied to Jax's discussion New stuff for sale for home in packaging still .. in my shed ready to go to a new home
"I also have an hob extractor see manual image  in box unopened ? "
17 hours ago

Things As They Ought To Be - Private View 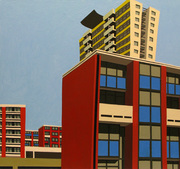 “Things as they ought to be” will display 5 completed paintings and 1 in-progress installation with images captured by the residents and McCorry together. During his residency at EXHIBIT, McCorry has always had an on-going interest in the Golden Lane Community Club, and has constant dialogue with the participating residents. It is his hope that by engaging as many residents as possible to collaborate in his process, their emotional viewpoint about living on the estate will be brought closer to the observer.

Anthony McCorry was born in Birmingham in 1963, where he spent his childhood in the Chelmsley Wood area of Birmingham, at the time the largest area of social housing in Europe. After graduating from the University of Sunderland with a BA (Hons.) in Fine Art, and completing an MA Fine Art at Coventry University, McCorry spent many years focusing his work on built environments and exploring the theme of social housing through painting. During excursions made to other British towns in the 1980’s as a football supporter, McCorry confronted a number of unsettling landscapes, which reinforced his unique observations and recurring memories of living in Chelmsley Wood. Since then, he has captured whatever triggers his consciousness and compulsions, using photography, brushes and paint. In his work, shut-down pubs, run-down structures and uncanny vistas, all display a disquieting quality about decay and alienation. McCorry idealizes the actuality, shuns the conspicuous, and subtly turns everything into a world of meditation.

In 2001, McCorry received a Creative Ambition Award from West Midland Arts and the encouragement resulted in his biggest and most ambiguous project yet - “British Estates.” This involved documenting specific areas of social housing in and around major British cities. The project has continued to develop, as has his style and approach. During his 6 months artist-in-residency at EXHIBIT, McCorry has extended his artistic manifesto to challenge long-held preconceptions. Influenced by the unique environment and the supportive community, the dream-like quality of the new series of work will expose the artist’s own emotional response to a reality he once ceased to believe in.

RSVP for Things As They Ought To Be - Private View to add comments!