Hi we need more boxes for moving. Please let me know if you have any and we can collect them this weekend at a time to suit you. If I don't hear of any by Friday noon, I will source elsewhere. ThankyouSee More
16 hours ago
0 Comments 0 Likes

Barbican LibraryExhibition of the Society of Artist in Architecture (SocAA) – ‘Cities’All works are for sale and the Private View on Monday 5 September from 6.00 – 8.30 is open to all. Drinks and canapes will be provided. Please respond through Eventbrite ‘SocAA Barbican Library Private View’ https://www.eventbrite.co.uk/e/395090705937 or email the secretary below to register your interest and get a ticket. See More
yesterday
0 Comments 0 Likes

Christine Clifford replied to Jax's discussion I know we need Lecky but this is sad and noisy and dusty and dug up 3 time since new pavement laid a few months ago.
"At least they a dealing with it all this time instead of patching "
Aug 5

Billy Mann, Golden Lane Estate resident, writer of regular column the 'Golden Lane Gazette' for City Matters, Secretary of the Golden Baggers allotment group, Community Builder and collector of tasty gossip has joined the GLE Comms Team to bring you a regular slot about the people who live and work on Golden Lane Estate, with his good self as first subject. Read on - How long have you lived on the Golden Lane Estate?

What brought you here?

Where were you before?

What is your favourite TV programme?

Are you a good liar?

No. I can bluff, but I can’t tell real porkies very convincingly.

Can you keep a secret?

Yes, easily. You could stick hot needles in my eyes and I wouldn't spill the beans. 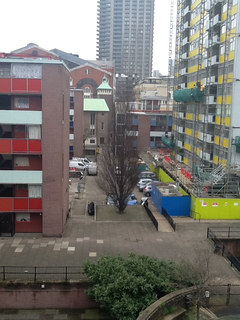 What can you see out of your window?

Bayer House, the Welsh church and the Barbican towers. I can tell how windy it is by looking at the tree swaying (pictured left).

What do you like about living on the estate?

It is like a soap opera. All the characters are here: the bonkers people, the flirt, the busybody, the delinquent teenager, the bossy officials. And there is loads of gossip. I heard that someone in Basterfield House once slept with David Bowie.

What changes have you seen or expect to see?

The helicopters overhead have been replaced by drones.

What is you favourite film?

Local Hero. It's an old Scottish film in which the residents of a fishing village take on the US oil industry, and win. Peter Capaldi, who used to be Doctor Who, is in it as a hapless oil exec. Do you support any teams?

What is your favourite building on the estate?

That hidden Porter's Lodge at the bottom of Great Arthur House (hush hush).

Any other bits of the estate you like a lot?

'Boys of Summer', by Don Henley. How important is it to know your neighbours?

Very, in my case. I had a stroke five years ago and without my neighbours watching out for me things would have been very tough and a real struggle. But I made new friends instead.