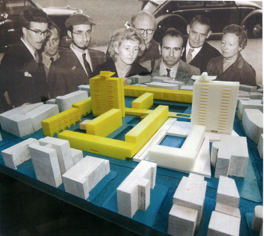 This is a collage of 1950’s local Londoners looking at a model of my future proposal for the Richard Cloudesley / COLPAI site on the north east side of the Golden Lane Estate. It is a sketch model, a general arrangement.

The primary aim is to extend the principles of the existing layout, as well as showing how the proposed uses for the site could be accommodated. It is meant to extend the existing Estate in a similar manner to the already existing buildings and spaces. To do this I proposed a new sunken court on the north side of Basterfield House the same width, depth and more or less length of the lawn in front of Basterfield House. It is intended then that the school buildings group around the east, north and west sides of the new space, and having their lower floors sunk into the space, so as to reduce the rooflines of the school. The school building on the west side will be the school hall entirely buried beneath a new pedestrian podium around a new tower block that uses the same cladding panels recently developed to clad Great Arthur House. It is intended that the school hall would be used for communal uses out of school hours. The tower will contain the 66 new council flats, and in the model this is a first idea. In my mind I’ve made some alterations but I still like it as a sister tower to Great Arthur. This new building would also make a new place of West Baltic Street, enclosing the old big plane tree that stands there with a new façade at right angles to the north side of Hatfield House. It is intended that there will be pedestrian access from West Baltic Street, perhaps passing under the new tower and going through to the roads at the back of Basterfield House, and from there into Golden Lane itself. This is how the new plan would fit in with the existing:

The red line shows the position of the tower, the orange line the school buildings, and the green line the new sunken court. You can see that there is a potential for a large open public space to the west of the new court, using in part the roof of the new hall that faces into the lowered courtyard. The classrooms on the north and east sides will also open into this space. 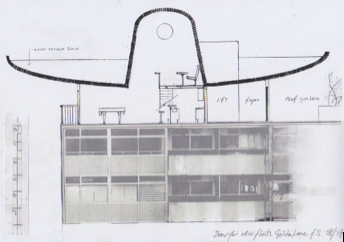 On top of the new tower I have stolen the form of the concrete bonnet on top of Great Arthur and turned it through 90 degrees, and moved it to the south end of the block. The idea is to have a new bar in this structure to replace the one lost from the community centre.

The Golden Lane Estate is universally recognized as one of the best examples in the United Kingdom realized by the political and architectural crusade in the 1950’s and 60’s to have the best architects in the country design and build through the local authorities housing for everyone. It is now seen as the highest achievement of British Modern architecture. I hope my proposed extension will compliment our beautiful Estate, and make the pleasures of living here available to newcomers to our community. 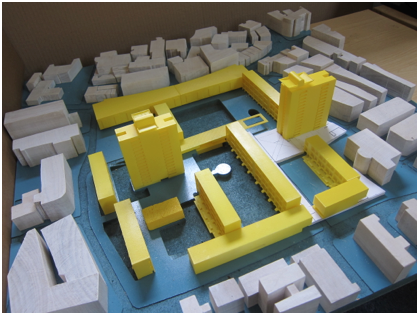