Which is best broadband provider?

Hello,What are residents experience of broadband please?We had a heavy sell from Hyperoptic in Cullum Welch so I gave them a go.But 6 weeks later have functioning router but still never had Internet.Has anyone had positive experiences with other broadband providers please?See More
6 hours ago
0 Comments 0 Likes

We are looking to swap our 2 bedroom flat in Bayer House for a 3 bedroom flat anywhere on the Golden Lane Estate. Our flat in freshly renovated and the original wooden floors has been sanded down. We have two fast growing daughters, who are quickly outgrowing the bedroom they are sharing.If you are looking to downsize, please let us know. We would be happy to take flat in any condition and we can also help with moving formalities.See More
8 hours ago
0 Comments 0 Likes

Vasileios Bakas replied to Alex's discussion Major Works Costs: Crescent House (2022-2027)
"On the meeting minutes from the Residents Liaison Group of the 25th of August there is mention of a published Simplified Cost Document but it is not attached to the published minutes. Did any of the participants get hold of it?"
yesterday

Linda replied to Linda's discussion Trolley needed for a few hours.
"Hi there Richard, sounds good. I would need them from 9.30 and then return max 2 hours later tomorrow"
Thursday

This year's Golden Baggers annual trip on Sunday 5th May was to Wakehurst in Sussex.

Wakehurst comprises a 16th century mansion house set in 500 acres of wild botanic garden, managed by the Royal Botanic Gardens, Kew. The gardens are designed as a living collection of woodland trees and plants including many rare species from across the globe which are grown especially for research, conservation and educational purposes. Different areas of the garden have been deemed climatically suitable for growing, variously, Southern Hemisphere trees, Asian rhododendron species and North American birches. 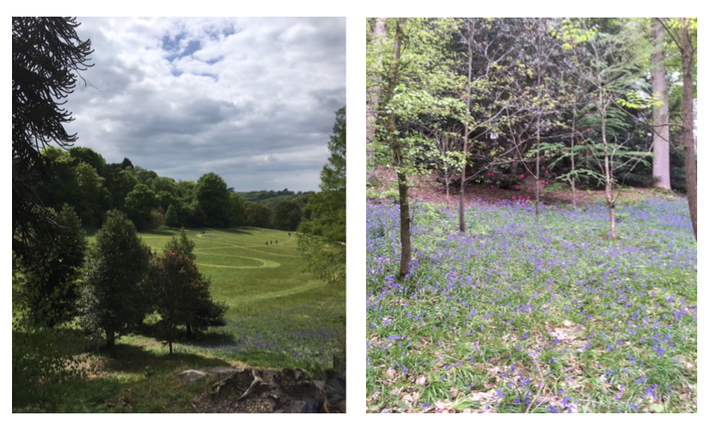 However, a particular highlight for this trip was that we arrived at the height of Bluebell season with millions of delicate flowers carpeting the woodlands throughout the gardens. Wakehurst is well set up for visitors of all ages with a number of garden walks of various lengths and degrees of strenuosity and it is a great place to picnic with a grassy glade being particularly popular. This had been left to grow wild but for a meandering path strip mowed through it as a form of land art. Another unusual area is the rock walk, an outcrop of sandstone with seemingly ancient yew trees growing  from the cracks. 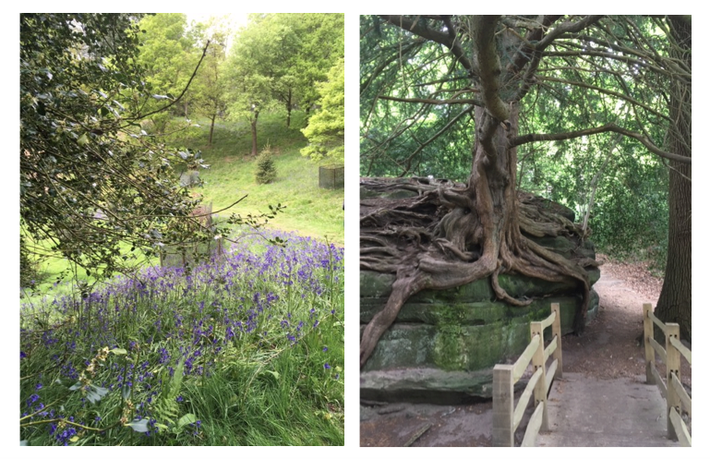 The far end of the gardens comprise a lake, wetlands, and a stream, accessible across an extensive Boardwalk and creating a thriving environment for wetland birds and insects. 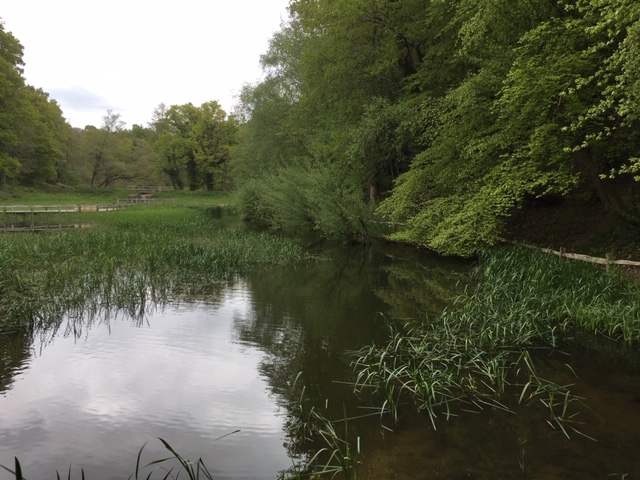 Heading back towards the main house, the wilder, naturalistic forest slowly gives way to a more managed series of gardens culminating in a vivid formal display of Himalayan flowers. 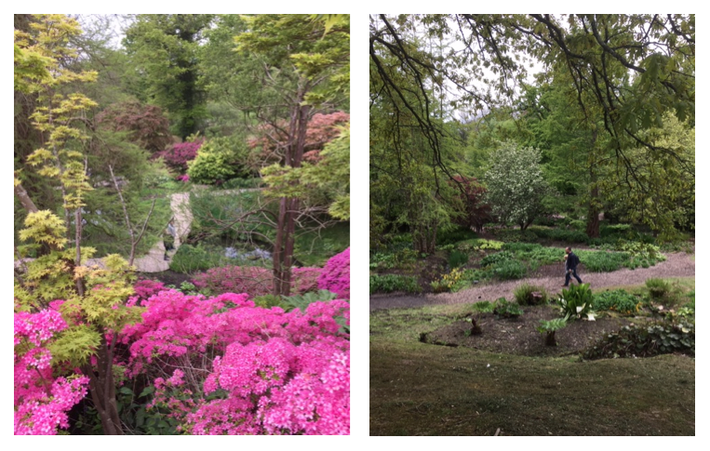 A significant attraction in itself is the Millenium Seed Bank. This is both a repository of rare seed species whose preparation and conservation could be viewed through glass sided laboratories (though not unfortunately on our visit) as well as an educational experience. 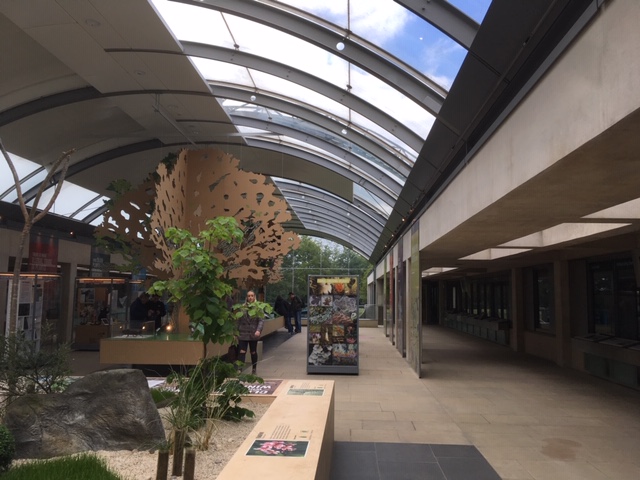 The various displays explain the huge importance of maintaining biodiversity and the threats to our ecology posed by global warming but also showcase the inherent beauty of the seeds themselves in a series of microscope enlarged images and displays. 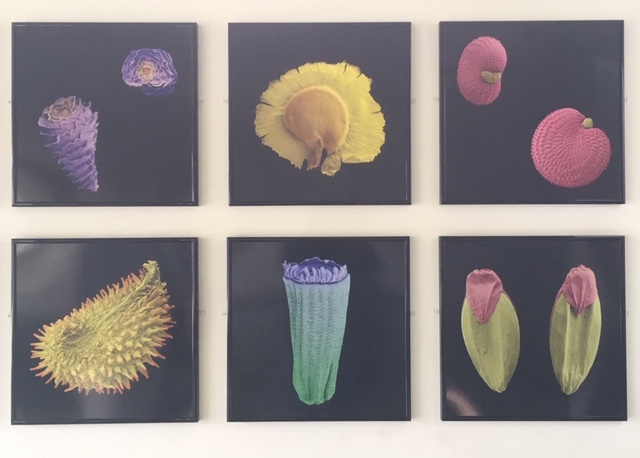 It was also interesting to see what plants will thrive amid rising temperatures, higher CO2 and nitrogen levels and increasingly extreme weather patterns approaching the year 2050. We may get used to planting such as dwarf birches, cocksfoot grass and frangipani and should certainly look towards non invasive, pollinator-friendly plants that can survive on little water. Our final stop was at the nursery to bring home some new acquisitions for the garden followed by a nice cup of tea before heading home. Great thanks are due in particular to Sue Pearson for doing all the organisational heavy lifting in order to make it a really enjoyable day out spent with friends and meeting more of our neighbours. Looking forward to next year's outing. 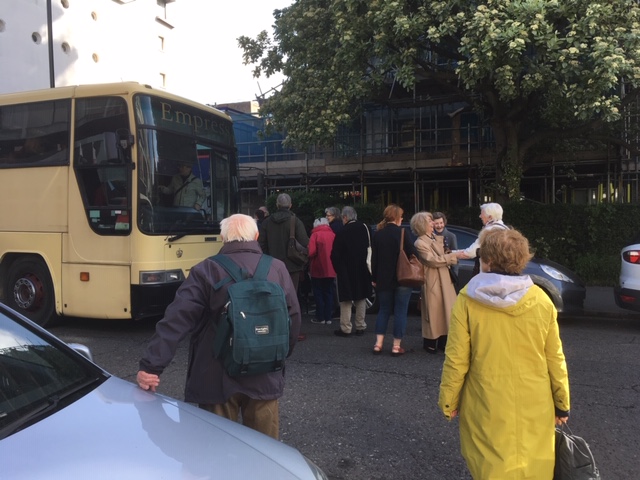