Erno Goldfinger’s Trellick Tower is 50 years old this year. The Grade Il* listed building is part of the Cheltenham Estate in Kensal Rise. It comprises 157 flats in the main tower and a further 60 apartments in the lower blocks.On Saturday 9 July, the Trellick Tower Residents’ Association is holding a festival to celebrate the past, present and future of this iconic building. Several homes both in the tower itself and the adjacent Edenham Way will be open to the public for tours.There will also be a talk from architect James Dunnett who worked with Goldfinger early in his career. Closest Tube WESTBOURNE PARKSee More
Wednesday
0 Comments 0 Likes

Joan Flannery 1928 - 2022It is with great sadness we inform you that Joan Flannery died in UCLH hospital at 11am on Wednesday, 15th June 2022 in UCLH hospital. She slipped peacefully away leaving her son Marc and three grandsons, Nathan, Kieran and Joseph.Joan was born a Liverpudlian in 1928 moving to London in 1948 where, among other roles, became the Landlady of the 'Three Greyhounds' Pub in Soho during the 1950’s. When Marc was born in 1960 they found themselves living in a one bedroom flat in Old Street where she had the support of wonderful friends and neighbours.On returning to work at the GPO (now BT), Joan was soon able to move onto Golden Lane Estate, first to Hatfield House in 1969 before downsizing to Great Arthur House in 1984 when Marc left home.Anyone who knew Joan would remember her as a fiercely determined and the driving force behind the Golden…See More
Jun 27
1 Comment 0 Likes

The Standards Committee, at its meeting last Friday, did not abandon its policy of granting residential councillors dispensations to vote “only in exceptional circumstances", and will thus continue to disenfranchise the City’s residential electorate. It also failed to hold a proper vote itself in public.

This caused concern among a number of residents who had come to observe the meeting. They clearly saw that the vote was 5-5. One of them raised her hand, and politely said that she wasn’t going to ask a question, but she see didn’t see how that result had been reached. The Standards Chair retorted “Nor do you need to”, adding that she wasn’t having any of the members “pilloried”, thus wrongly attributing to the resident the motive that she wanted to identify which members had voted against the recommendation (although, according to the “accountability” Principle of Public Life, there would be nothing wrong with identifying them).

Later in the meeting, after the public had been excluded, one of the newer members said he had not wanted to raise the point at the time because of the "tense" situation, but he also queried the vote. After discussion, it was agreed that the vote should have been 5-5. (The discrepancy was due to the Standards Chair having decided not to use her casting vote.)  Another newer member called for the correct vote to be recorded in public session.

So the residents were right. That is a theme which runs throughout the matters decided at the meeting, as summarised below.

Summary of the key outcomes of the meeting

The Standards Chair referred to the experience of the last six months, during which the operation of the dispensations policy had been “monitored”. The declaration by a significant proportion of the residential electorate at the outset of that period that they had no confidence in the dispensations policy would, one might think, be a material consideration, but the longer serving members of the committee seemed not to think so. None of them addressed the points raised in the petition, the two ward mote resolutions or the two letters from the City’s two largest residents’ associations. They acted as if those things simply didn’t exist.

Some of the longer serving members persisted in referring to “blanket dispensations”, implying a dispensation to speak and vote on any matter during a member’s term of office. That would plainly be unlawful, and has never been called for by the residents. What the residents have consistently called for, beginning with the petition, is a “general” (but not unlimited) dispensation of the kind described in the attached graphic. All the members of the committee were sent the graphic before the meeting, but the longer serving members ignored it in the discussion.

If any member of the Court can explain why a “general” dispensation of this kind would not provide a lawful, sensible, practical and simple solution, or why it should not at least be trialled up to March 2021, they should say so. So far no-one has.

One of the co-opted members referred to the rule against bias, which applies largely to planning and licensing meetings, and expressed concern about the Corporation being exposed to damages if that rule was  breached. A newer member pointed out that this was an entirely separate matter from dispensations under the Localism Act, which have a wider scope.

Section 618 of the Housing Act 1985 is an outdated and restrictive provision that applies uniquely to residential councillors in the City. The committee agreed unanimously (but it would have been difficult for it not to) that it would recommend to other committees that they approve lobbying for the repeal of this section. The City Solicitor advised that “on any analysis, it [section 618] will be with us for some years  to come”. A newer member pointed out, however, that a housing act would come out of the next Queen’s speech, and that would be an obvious opportunity to make the repeal.

The committee decided to reject four applications for “general" dispensations that had first been made four months ago, and resubmitted after the Dispensations Sub-Committee failed to address the points made in support of those applications either properly or at all.

The committee decided to shorten the application form, but make it mandatory.

The next committee meeting is scheduled to be held on 24 January 2020. One can expect more discussion then on dispensations to speak and vote, because the members agreed to revisit both subjects at their next meeting. However, in view of the divided opinion in the committee and the continuing opposition to reform from the longer serving members, one cannot expect anything useful to come of it.

The current situation will therefore continue. Resident members will continue to face a confusing patchwork of existing dispensations and a need to apply specifically for new ones. New applications will often need to be made at short notice because meeting agendas are generally only distributed a week in advance. Many applications will have to be decided under the urgency procedure, because it has been proved that Dispensation Sub-Committees cannot be convened within a week. Members can expect most applications for dispensations to vote to be refused, because in the City (uniquely, it seems, among local authorities) the interest of members’ constituents is not considered to be a sufficient reason for members to vote. Matters which most affect their constituents may therefore be decided by other members with no local knowledge, interest or mandate. There is no appeal from a dispensation decision, and judicial review would not normally be practicable in terms of time and cost.

City residents will remain disenfranchised, compared with residents anywhere else in the country.

This may be acceptable to the Court, most of whose members represent generally uninterested business voters.

But it won’t be acceptable to residents. I predict that, over the next six months, the dispensations issue will be conflated with other issues, some of which are in the public domain, and some not yet. Those issues will together feed growing resident activism (as evidenced by the demonstration outside the west wing at the last Court meeting). Pressure will increase, and external political intervention will be sought, for the Corporation’s local authority functions to be exercised by a more democratic institution. 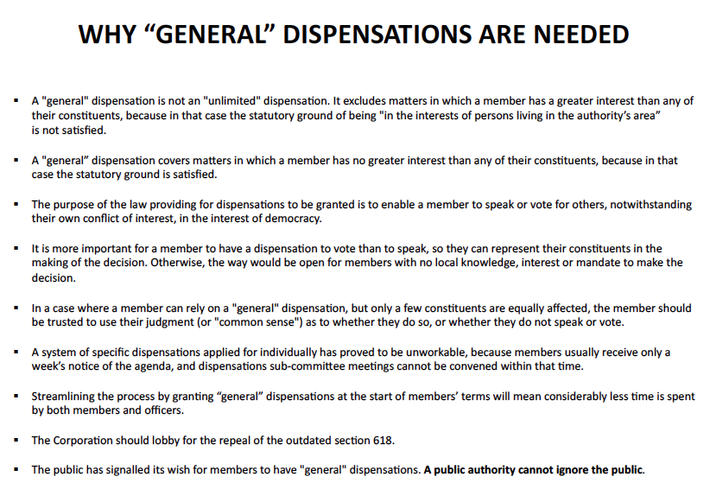