Have your say on a new City carers' plan

Are you an carer providing unpaid support to a resident of the City of London?

The City of London Corporation is keen to hear your views on their draft Carers Strategy. You can read the draft City carers' strategy here .

Please send you views and comments to Healthwatch City of London by 7 January 2018 via info@healthwatchcityofLondon.org.uk 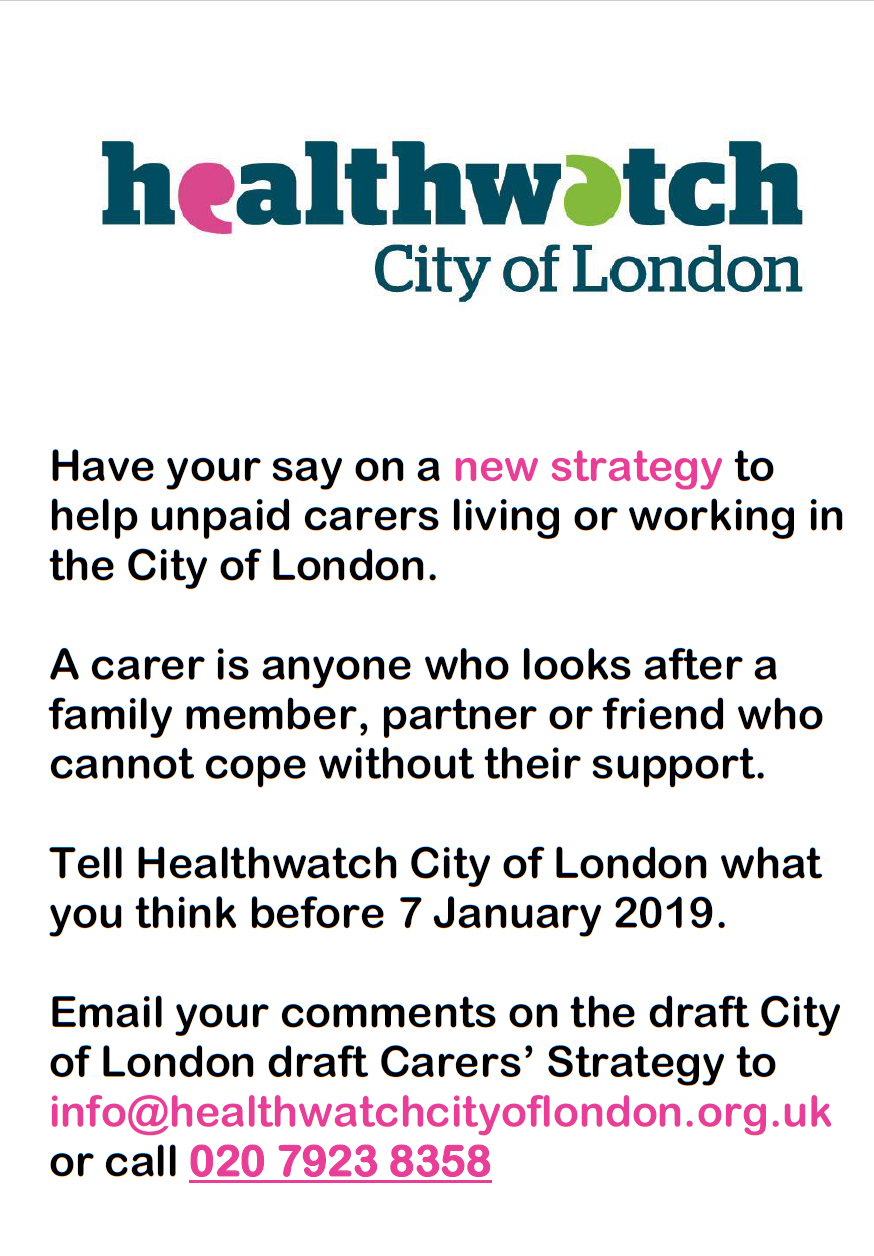 Good evening.  Thank you for this post.  You say the City of London Corporation is keen to hear our views, so I thought I would post mine here.

I am a full time and only carer to my elderly partner, who suffers from dementia.  It is a very stressful and demanding situation, as am sure carers will relate to you.  I also have a serious psychological illness, that requires a lot of medication.  The City of London are fully aware of my situation.  However, last year, at the end of November 2017, they forcibly removed a 'roof garden' I had lovingly tended for about 20 years, despite medical objections from my doctor.  As a result, I attempted to climb over some railings, as I was so petrified, and I was taken to hospital after I collapsed in shock.  I was there for 2 weeks.  City Officers took the opportunity to strip away my 'garden' whilst I lay in an ambulance,  and failed to alert Social Services that my partner was alone, as destroying something that was of medical benefit to me appeared to be of more importance to them than caring about my partner's welfare.  As a result he wandered off looking for me, and had a fall, and was taken to hospital.  My little dog ended up in the police station.  So, we were all separated for a long time, which particularly caused my partner unnecessary distress.

My main point is that in order for carers to be valued and respected the Housing Department need to understand how devastating some of their actions can be on vulnerable people.  It is of little use to cause havoc, and then expect Social Services, for example, to 'pick up the pieces'.  They need to listen to medical advice, and work towards acceptable compromises when dealing with residents.  We are all different, with different needs.  We are humans with feelings.

I experienced one City Officer writing to the Town Clerk telling him I had a 'personality disorder', even though I had never been diagnosed with it, and putting it in a negative way,  by treating me as a 'nuisance', instead of a person who needed compassion and understanding.

No risk assessment was taken before the City took this action, and, not only did I lose something I had cared for, for so long, but I suffered a loss in my confidence, and have had bouts of severe depression, and so have had to spend more time in hospital.  My partner was left heartbroken also by the removal of the area he had loved to sit in.

I am sorry, but I fail to see how, based on my experience, that the City do indeed have the interests of carers at heart.  However, I am always willing to try and work with them for a better future, if they are really want to show they care.  I think its in everyone's interests that carers, and vulnerable residents are respected, along with all residents, and can have a good relationship with the City.  That can only happen if they listen.

So sorry to hear you lost your treasured garden. Gardening can be so therapeutic for people living with stress in their lives. I will make sure you comments about the role of housing is included in the feedback. They have extended the time in which carers can provide comments to 14 January now so if you think of anything else that is relevant, do email us at info@healthwatchcityoflondon.org.uk.   And please ask any other carers/neighbours to respond too.

Thank you for sharing

Thank you so much for your kind words.  I have to do all I can to get justice for my case, and will, in the meantime, contact you if I have any further comments. One day, and I am hopeful, the City of London will realise that we all need to be listened to, and respected as valuable members of the community, which all residents are.  That is the only way forward.

I also wish you a Merry Christmas.